Click here for Information about the Shimla - Kalka mountain railway

The best method to travel between Shimla and Delhi is by train. The route involves two trains with a connection at the bland city of Kalka. The train from Delhi to Kalka is a typical Indian express train, while the train between Shimla and Kalka is a highlight of any visit to Shimla. The Shimla narrow gauge train slowly winds around the foothills of the Himalayas passing through countless tunnels and bridges while providing spectacular views for passengers.

Another twist on the Shimla railway

Purchasing tickets on the internet via the Indian railways website can be a chore, as the train number (5 digit) depart station code, arrival station code (both given in table at end of this guide) along with the seating class must be entered. The Kalka to Shimla train line is a narrow gauge line and the trains slowly claw up the mountains while the intercity bus services are faster but less enjoyable. 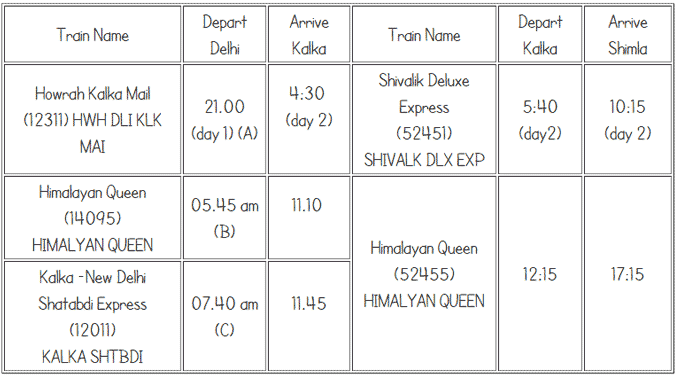 The mini train from Shimla heads down the mountains

There are two train options which depart from Shimla either the Himalayan Queen which arrives at Delhi in the middle of the night or the Shivalik Deluxe Express which involves a night train. The Shivalik Deluxe Express is a faster option as it does not stop at each of the small stations on the route down the hills but costs more than the Himalayan Queen. It is advisable to pre-book accommodation if you are arriving into Delhi late at night as the city can be very over whelming. 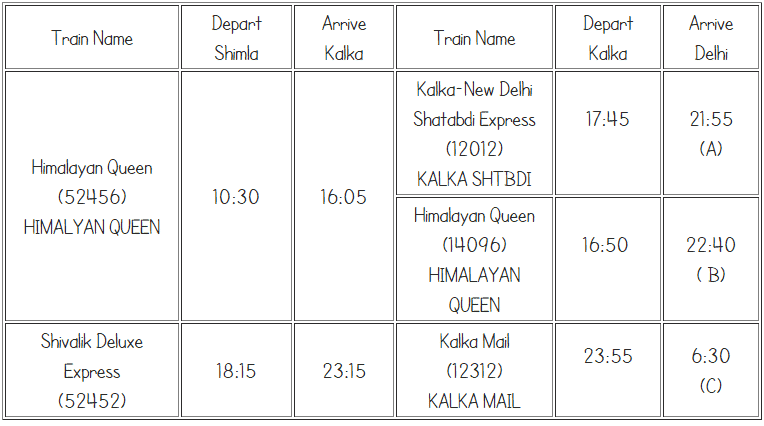 Introduction
When to Visit?
Shimla Weather
Things To Do
Shimla Population

2WeekBackPack.com, ShimlaIndiaGuide.com and www.Jaipur-Travel-Guide.com with over 220 guides and travel suggestions, if it's not written here it's probably not in India

The web's best guide to Shimla